This article dives into how Spark SQL does multi-table JOINs and how we achieved really fast JOINs using Datastax DSE (Spark and Cassandra), and FiloDB.

At Tuplejump, we help different enterprises build modern big data platforms based on the latest technologies. One of our clients is Element Financial Services, a leading fleet management and equipment finance company. They have picked Datastax Enterprise as a go-to platform for replacing their data warehouse and powering their next analytics and BI platform. Datastax Enterprise provides a stable, easy to setup Cassandra installation with Spark support built-in, enterprise features, and professional support from Datastax.

What makes the adoption of Datastax Enterprise, Cassandra, and Spark challenging for building a data warehousing and BI platform? First, the platform is expected to meet current SLAs for reporting and ad-hoc analytics through existing BI tools. Cassandra is a rock-solid distributed database, but it is more designed for thousands of concurrent, small reads and writes, and not so much for traditional analytics workloads which involve scanning millions of records. The variety and ad-hoc nature of the queries prevented widespread use of pre-aggregation. Meeting the expectations would require pushing the platform to its limits and innovating. Second, due to both existing queries, reports, and usage patterns, the normal Cassandra data modeling technique of denormalizing all tables was not possible. Slowing changing dimension tables and other business requirements means that JOINs are preferable compared to increasing ETL complexity by an order of magnitude. JOINs are not yet very efficient in Apache Spark, though they are improving by the release. Thus, we set our goals on being able to execute JOIN queries on Datastax Enterprise in under 5 seconds, with some concurrency.

We started by modeling fact and dimension tables such that the majority of queries could be expressed as single-partition queries. To be more specific, given partition keys A, B, and C, the fastest queries happen when they query data with a WHERE clause looking like WHERE A = val1 AND B = val2 AND C = val3. These predicates result in an exact match for one Cassandra partition, and the Spark-Cassandra connector is able to reduce the query to a single Spark partition / thread, and query just one Cassandra node. (This is often referred to as predicate pushdown) Queries with other predicate combinations resulted in either multi-partition queries or whole table scans, which would take minutes. Modeling our tables in this way maximizes Cassandra’s advantage of fine-grained partitioning and filtering.

The next step is join optimization. Let’s say you have this query:

Let’s say that column a is the partition key for both tables t1 and t2. Thus, Cassandra will get the predicate pushdown for reading from a single partition for table t1, but initiate a full-table scan on t2. This would be really slow. One option is to force users to specify an additional predicate by hand, such that you have this query:

This query is better as you have partition key predicate pushdown for both tables t1 and t2. Rather than needing to change user behavior and/or change the way that BI tools are used, however, we invested into writing a custom Spark Hive Thrift Server that can intercept the SQL queries, analyze them, and transform the logical plan to automatically augment JOIN predicates. (How to do that should be the topic of another entire post :) The custom server also gives us an opportunity for other custom plan transformations, such as picking the most optimal Cassandra table to answer a given query and substituting that table in the query plan. We are in the process of contributing some of these optimizations back to Spark via SPARK-13219.

Finally, in order to achieve the concurrency needed, we ran the Hive Thrift Server and any other Spark apps using FAIR scheduler mode spark.scheduler.mode=FAIR. We have observed that on a cluster, even for large Cassandra scan jobs taking up all threads, that Spark is able to schedule concurrent jobs running within the same app.

Use all Cassandra Tables

Here is the DAG and event timeline visualization from the Spark UI of running a 4-table JOIN reporting query on a small DSE 4.8 cluster. The nontrivial query consists of selecting 29 columns from 4 tables, 3 join columns, and 27 grouping columns. The partitions in the largest tables contain many thousands of rows each. 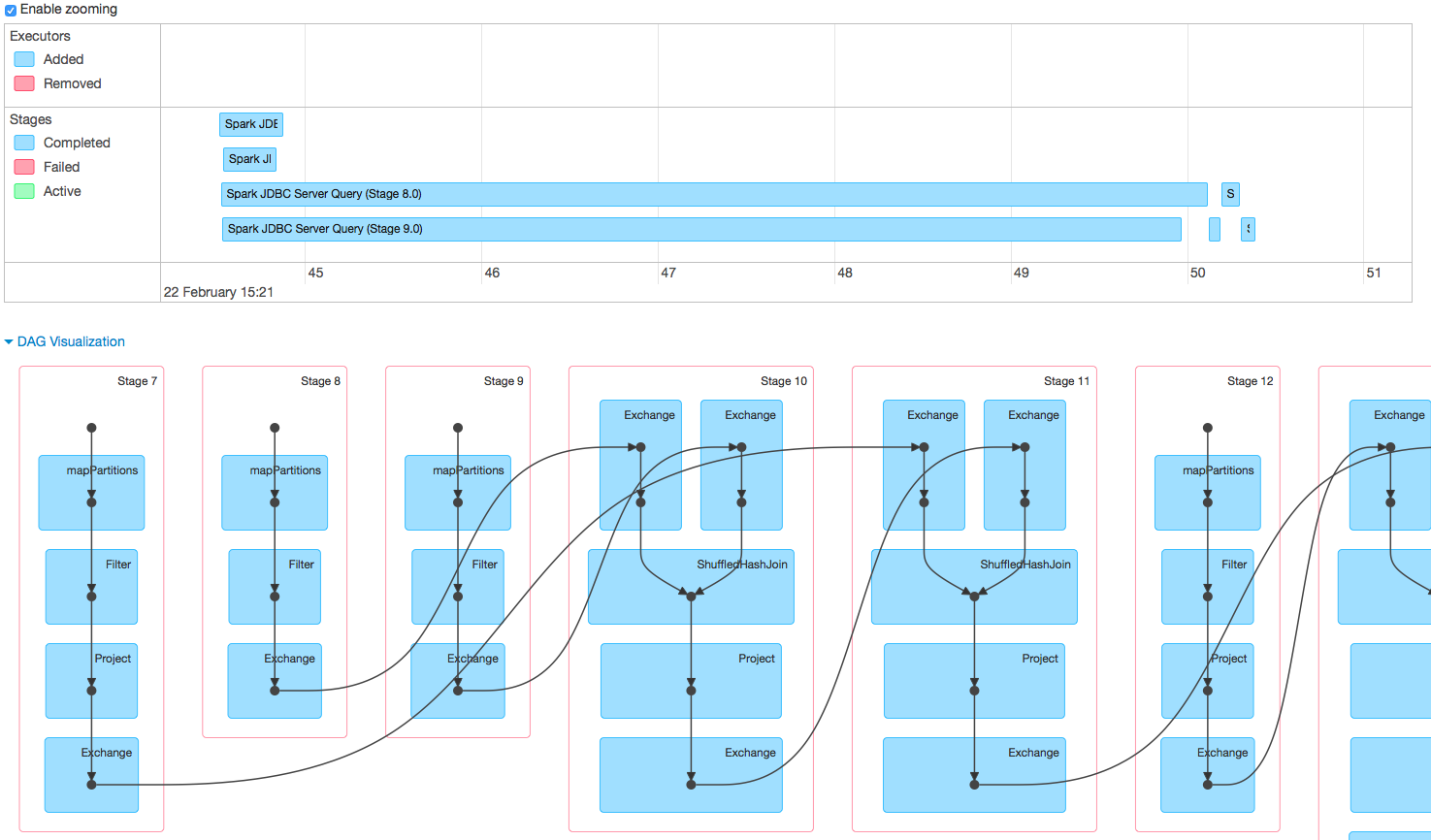 Spark’s DAG Visualization is a great tool to show the different stages, how they are related, and what operations take place in each stage. You can see that there are two different kinds of stages here - 7, 8, 9, and 12 consists mostly of MapPartitions and Filter, and have no dependencies on other stages. These are the stages that read data from Cassandra tables in parallel (MapPartitions) and filter them. Stages 10, 11, and 13 are the Join stages (ShuffleHashJoin), and the lines indicate how Spark executes a 4-table join: first the data from 7 and 8 are joined in stage 10; then the results of 10 and the data from 9 are joined; and so forth.

From looking at the event timeline, you can draw several conclusions:

Overall, the plan worked fairly well. Using good data modeling with partition key pushdowns enabled reads to be parallelized, yet contained to one thread per table. Can we do better and improve on those long reads?

We decided to store data from the two largest tables (one a fact table, one a large dimension table) into FiloDB, which stores data into Cassandra in a columnar format optimized for fast analytical/OLAP queries. FiloDB has a data model similar to Cassandra’s, meaning we can utilize the same strategy of single-partition lookups to effectively filter queries. When the two large Cassandra tables are substituted for FiloDB tables, here are the results: 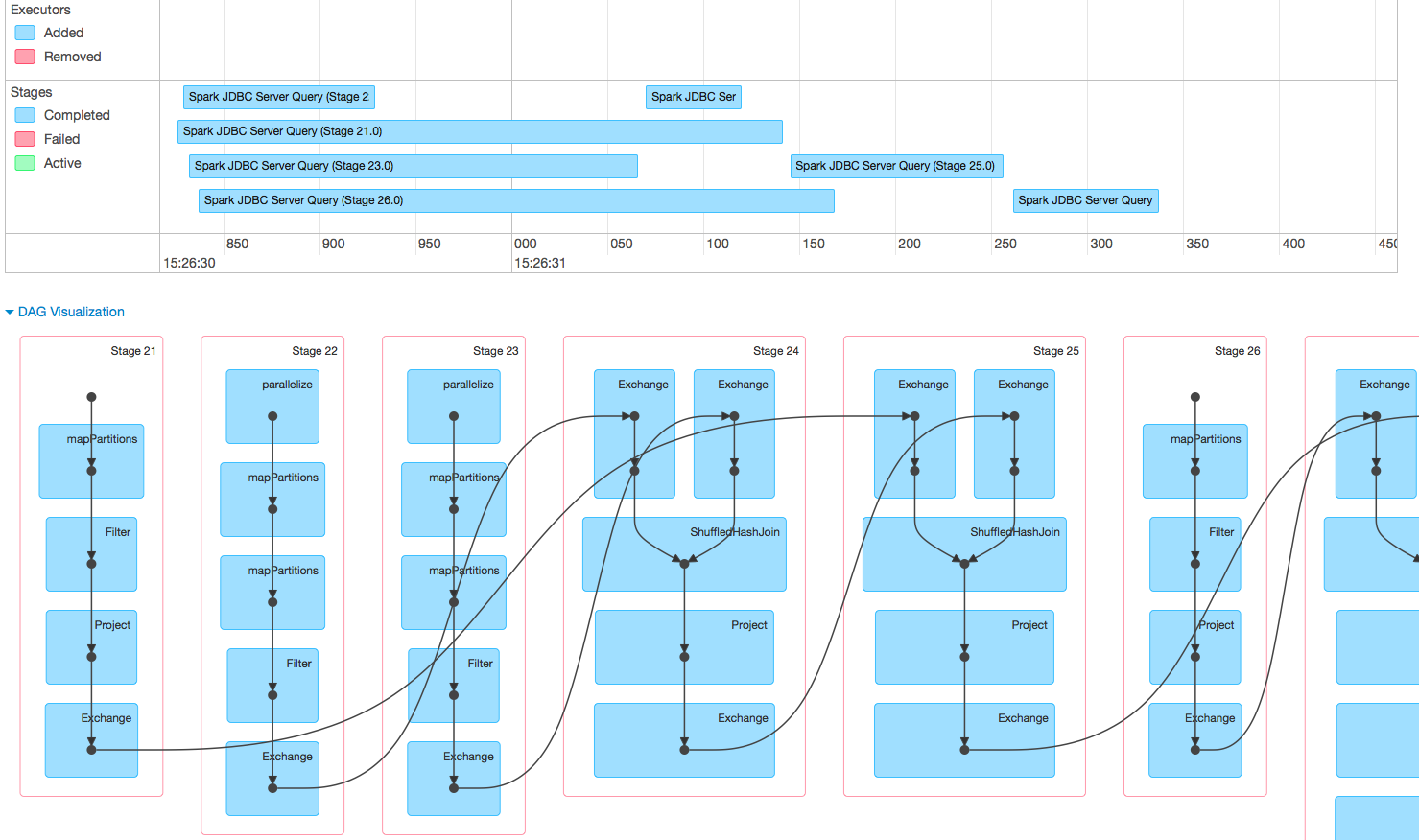 We’ll focus on the event timeline, since the DAG is the same except for the stage numbers. Note that the timeline scale is now in Milliseconds, and the entire 4-table JOIN query finishes in just over half a second! What enabled this speedup is the use of FiloDB, which reduced the previous 5 second reads to under 250ms each. (The FiloDB stages are 22 and 23, the ones with the “parallelize” at the top of each stage, as the FiloDB data source uses sc.parallelize / sc.makeRDD, while the Spark Cassandra Connector has a custom RDD class).

Where to go from here

You’ve hopefully seen the strategies and technologies that, when put together, can accelerate real world JOIN queries on Spark and Cassandra - even 4-table JOINs can run sub-second!

For more information on FiloDB, come and check out our O’Reilly Webcast, or feel free to play with the Github project. Also visit the Datastax Enterprise landing page.

If you are interested in working on leading edge big data technologies such as Spark, Cassandra, and FiloDB, consider joining our effort at Element and Tuplejump!